As you can see in the screenshot. The sdb3 is the device id of the USB drive. 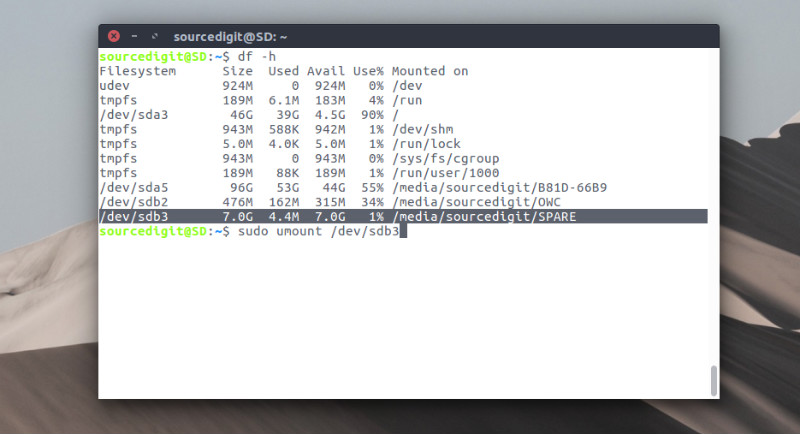 mkfs is a command used to format a block storage device with a specific filesystem. mkfs is used to build a Linux filesystem on a device, usually a hard disk partition. The device argument is either the device name (e.g. /dev/hda1, /dev/sdb2), or a regular file that shall contain the filesystem. The size argument is the number of blocks to be used for the filesystem.

The items in square brackets are optional, and the only mandatory argument (i.e., input) is filesys. filesys is the name of a device file (i.e., a file that the system uses to implement access to a physical device), such as /dev/hda3.

Now unmount the USB device. Whenever any USB drive is attached to Ubuntu Linux system, it’s automatically mounted. While the USB device is mounted you cannot format it. So to format the USB drive, first unmount it using the following command:

This is the most preferred filesystem from Linux Ubuntu Systems.

Please note to change the USB device id in the above commands. I have used sdb3 which is device id of my USB drive.

Divanshu - January 30, 2019
8
All the Linux distributions are either derivative of GNU/Linux ( OS made up of Linux Kernel developed by Linus Torvalds and GNU software repository)...

How To Install & Update Kernel 4.19-rc5 on Linux Ubuntu

How To Install TLP Battery Saving Tool And Improve Battery In...

We bring to you latest happening in the digital world and the technology space. Which company is going to launch what new product? When do you expect a gadget to be launched? How to fix your technology issues? All such questions and issues are at the core of Source Digit. Our small team ensures that you stay updated with the latest in this fast-paced digital world.
Contact us: divanshukhanna@unix-tech.in

How To Install Tilda Terminal Emulator On Ubuntu Linux